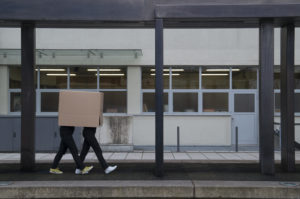 The performance takes place in a public sculpture next to the Landestheater Innsbruck. The sculpture contains of pillars that form a grid. Two people in a shared cardboard box find their way through it. Their four legs and the box merge into one body. Every bump into the architecture leads them to an alternative trajectory. When they arrive at the end of the sculpture they turn around and start from the beginning. They are stuck in the system they have choosen to move in. The rhythmical pattern of failure and solution goes on and on.